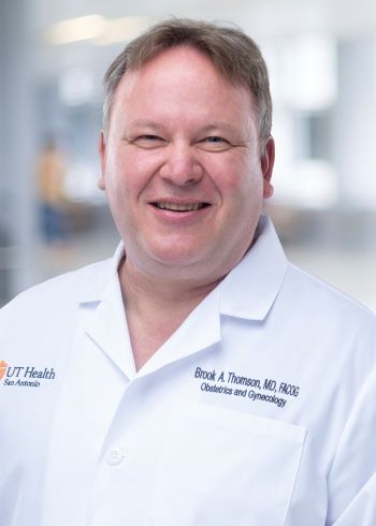 Dr. Brook Thomson is an Associate Professor and serves as the Associate Medical Director for Inpatient Obstetrics, Director of Quality, and Deputy Director of Obstetric Simulation and Outreach for the Department of Obstetrics & Gynecology at the University of Texas Health Science Center at San Antonio (UTHSCSA). He completed his undergraduate degree at Stanford University after which he attended the Uniformed Services University of the Health Sciences where he received his MD degree. He completed his internship and residency in Obstetrics and Gynecology at Madigan Army Medical Center in Tacoma, Washington. He is passionate about patient safety and team dynamics and is one of the initial project participants who worked on the development of MedTeams which is now known as TeamSTEPPS, a program used ubiquitously across the United States. He is a principal contributor on the American College of Obstetricians & Gynecologists (ACOG) Emergencies in Clinical Obstetrics course and is a member of the national ACOG Simulation Work Group. He is on the Board of Directors for the Society of OB/GYN Hospitalists and has served as the Simulation and Annual Clinical Meeting Committee Chair as well as the Secretary for this organization. He has built two OB Hospitalist programs and served as Director of the OB Hospitalist Division at Baylor College of Medicine. He has served as a Maternal Medical Director and was selected as the inaugural ACOG surveyor for Levels of Maternal Care in the state of Texas. He has been selected by the Texas Department of State Health Services (DSHS) as teaching faculty for TexasAIM working on mitigating the effects of obstetric hemorrhage in 2020 and hypertensive emergencies in pregnancy in 2021. He has a deep passion for reducing maternal morbidity and mortality through the assimilation of information, determination of best practice, and creation of programs to teach and implement these practices into the everyday life of individuals and institutions. He loves his wife and six children and enjoys nothing more than traveling or attending the theater with them.