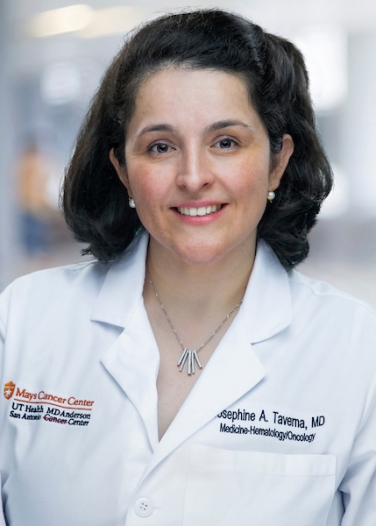 Dr. Josephine Taverna is a faculty member in the division of hematology and oncology.  She graduated from Yale in 1999 with a major in Molecular Biophysics & Biochemistry and received her medical degree from Mount Sinai School of Medicine in 2004.  Dr. Taverna completed her Hematology-Oncology & Cancer Prevention fellowships at the University of Arizona in 2015. In 2017, she graduated from the Advanced Drug Development fellowship at UT Health Science Center at San Antonio.  She completed a NIH/Lilly externship in February 2018 where she collaborated with the Pharmacometrics team at Lilly and helped to develop a quantitative systems pharmacology mathematical model to aid in therapeutic discovery. Dr. Taverna is a physician-scientist and serves as co-leader for the Phase I Thoracic Oncology program. During her protected research time, she works under the mentorship of Dr. Tim Huang, a prominent researcher who has pioneered next-generation sequencing for integrative analysis of cancer genomes. One of her long-term research goals is to study the effects of the targeted therapy on epithelial-to-mesenchymal transition to prevent metastatic tumor spread in lung cancer patients.  Dr. Taverna is deeply committed to her research in early drug discovery.