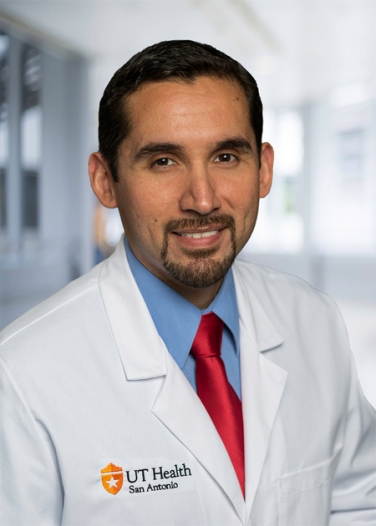 Miguel A. Palacios, MD is a Texas native and is originally from Round Rock, TX. He graduated medical school from the Universidad Autónoma de Guadalajara and then completed a Pre-internship year at New York Medical College. He moved to San Antonio in 2014 for residency training at UT Health San Antonio (formerly UTHSCSA) and has called it home ever since. During residency training he received several awards including the 2015-2016 Second Year Resident Recognition Award, the 2016-2017 Excellence in Clinical Geriatrics award, and the 2016-2017 Advanced Primary Care award.

Dr. Palacios is board certified in Family Medicine and joined UT Health San Antonio as an Assistant Professor/Clinical for the department of Family and Community Medicine in July 2017. He practices broad scope family medicine that includes caring for patients of all ages. His special interests include caring for the underserved, inpatient and outpatient procedures, behavioral health, and teaching the next generation of family physicians. In 2021 he was appointed as the Associate Clinic Director of the Family Health Center (FHC) at the Robert B. Green Campus. Aside from caring for his own patients, Dr. Palacios teaches medical students and resident physicians in various clinical settings including the FHC, the Family Medicine Hospital Service at University Hospital, Salinas Prenatal Clinic, and the Bexar County Juvenile Detention Centers. Outside of medicine, Dr. Palacios enjoys being outdoors, working on home improvement projects, and spending time with his family. His wife Maria and three children Santiago, Mariel, and Abigail bring him his greatest joys.