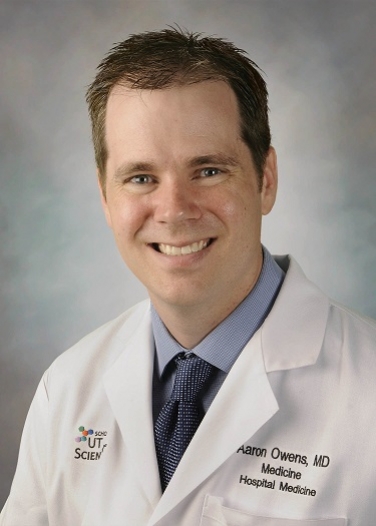 Aaron D. Owens is an Associate Professor / Clinical at UT Health San Antonio in the Division of General and Hospital Medicine. He has been a Hospitalist at University Hospital since 2005. Dr. Owens received his M.D. from The University of Texas Medical Branch at Galveston in 1999. He completed Residency from University of Texas Health Science Center San Antonio in 2002.  Dr. Owens was in Fellowship and Clinical Fellowship in Infectious Disease from 2003-2005 at University of Texas Health Science Center San Antonio. He was appointed Assistant Professor from 2005-2014 and has been appointed Associate Professor since 2014 at UTHSCSA. Dr. Owens is American Board of Internal Medicine certified since 2002. Dr. Owens also holds a certification for Infectious Disease from American Board of Internal Medicine since 2005. He has been awarded many awards for Outstanding Faculty since 2008. Dr. Owens is a member since 2006 of Antibiotic Subcommittee that makes recommendations to the P&T committee regarding approval of antimicrobials to University Hospital formulary.