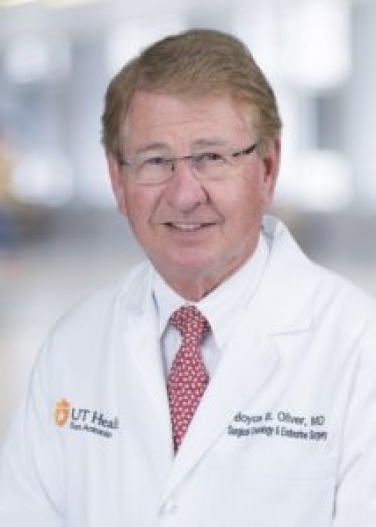 Dr. Oliver graduated from the University of Texas Medical School at Galveston, where he was awarded the Singleton Surgical Society Award. He completed his General Surgery training at Bexar County Hospital in San Antonio in 1975. Dr. Oliver then completed a Clinical Fellowship in Surgical Oncology at the University of Texas M.D. Anderson Cancer Center in Houston, Texas. He has been on the Clinical Faculty in the Department of Surgery at UT Health San Antonio since 1975. He is well known regionally as an expert in the surgical management of thyroid and parathyroid disease. His interest and expertise include the management of both benign and malignant breast disease. He is well known to the San Antonio community having previously served as both Chief of Staff and Chief of Surgery at the Metropolitan Hospital, and Chief of Surgery at the Nix Medical Center. His distinguished career has earned him a Texas Monthly “Top Doctor” award in the years 2004-2017.