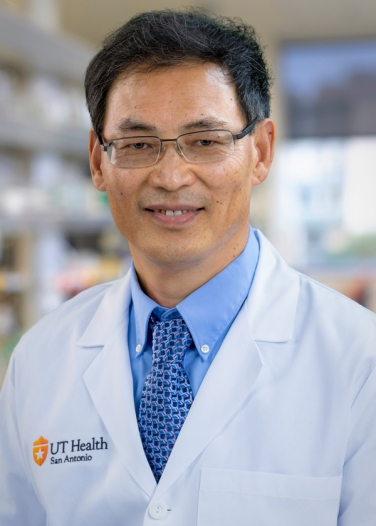 Our laboratory is the world-leading research group on lipidomics. We have developed an enabling technology with in-house software programs termed “multi-dimensional mass spectrometry-based shotgun lipidomics (MDMS-SL)”, initiated in the early 1990s and still under constant evolution. The MDMS-SL technology provides modular, robust, and label-free quantification of lipids. At its current stage, the technology enables us to identify and quantify nearly 50 lipid classes, over 95% of lipid mass content, and thousands of individual lipid molecular species from limited amounts of biological samples in an accurate (>90% reproducibility) and relatively high throughput fashion. By using lipidomics, we have developed a few research projects (supported with NIH funds and other sources) including AD and diabetes-associated dementia (outlined below), as well as multiple minor translational research projects such as anesthetics-induced neurotoxicity and cancer biomarkers. Finally, using our enabling lipidomics technology, we have established numerous (inter)national collaborations on a variety of research areas.

AD, a progressive neurodegenerative disorder, is the most common cause of dementia in the aging population. AD is characterized clinically by progressive cognitive impairment and neuropathologically by the appearance of soluble amyloid-beta (Ab), neuritic plaques, neurofibrillary tangles, and glial activation. Currently, there is no cure or preventive therapy for AD. The failures of hundreds of trials of disease-modifying therapeutics, including many targeting Aβ highlight our incomplete knowledge of both cause of AD and mechanisms of cognitive failure. Because of its high prevalence and the continuing increase of the aged population, AD is a major health problem with serious negative impacts on affected individuals and their families, as well as on local and global economies.

By using lipidomics, we previously revealed marked losses of sulfatide and plasmalogen, and drastic increases in ceramide at the earliest clinically recognizable stages of AD subjects and in animal models examined. Mechanistic studies uncovered the altered metabolism of sulfatide through apolipoprotein E (apoE) transport in an isoform-dependent manner. The reduction of sulfatide content is parallel to Ab deposition/fibrillation. Depletion of sulfatide results in Ab oligomerization, tau hyperphosphorylation, fibrous astrogliosis, and cognitive decline. Our current research on this project is focused on elucidating the causal connection of sulfatide deficiency to AD hallmarks by applying lipidomics, histology, biochemistry, animal behavioral studies, and other molecular and cellular approaches on murine and human cells, fluids, and tissues. For example, we are currently exploiting a novel inducible oligodendrocyte-specific conditional sulfatide-deficiency mouse line and other multiple knockin or transgenic AD animal models. We believe these innovative studies will allow us to understand the AD pathogenesis and identify potential drug targets for treatment/prevention of AD.