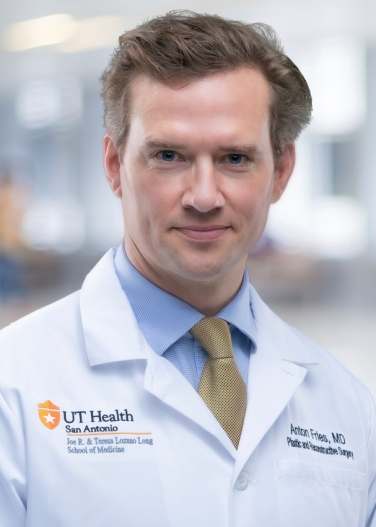 Dr. Anton Fries is the Division Chief and Assistant Professor for the Division of Plastic Surgery at UT Health San Antonio. He received his Medical Degree from the University of Cambridge and served for 20 years as a medical officer in the Royal Navy. He retired at the rank of Surgeon Commander, having deployed across the globe, including two combat tours of Afghanistan. During his plastic surgical residency he performed pre-clinical research at the United States Army Institute of Surgical Research in San Antonio, TX, and was awarded the International master’s degree in Reconstructive Microsurgery from Chang Gung University, Taipei. In Taipei he completed the world-famous microsurgical fellowship at Chang Gung Memorial Hospital. He has published over 60 peer reviewed research papers and won several research awards, in particularly relating to reconstructive transplantation. His clinical interests are in all aspects of microvascular reconstruction, including lymphatic super-microsurgery, as well as general reconstructive and aesthetic surgery.