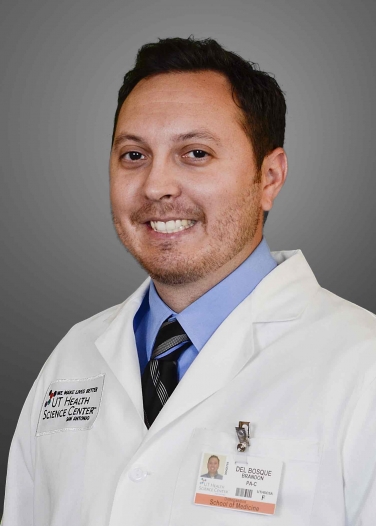 Brandon Del Bosque was born in California, and was raised in San Antonio, Texas. In 2007 he graduated from Texas State University in San Marcos, Texas with a Bachelor of Science degree in Biology and minor in Chemistry. He earned his Master of Science degree in Physician Assistant Studies from Weill Cornell Medical College in New York. After completing his training in 2012, he joined an Orthopaedic practice in San Antonio where he worked alongside an orthopaedic surgeon specializing in Shoulder Arthroscopy and Sports Medicine. He then joined the Department of Orthopaedics at University of Texas Health Science Center in August, 2014, practicing at the Medical Arts Research Center (MARC) and the Texas Diabetes Institute.