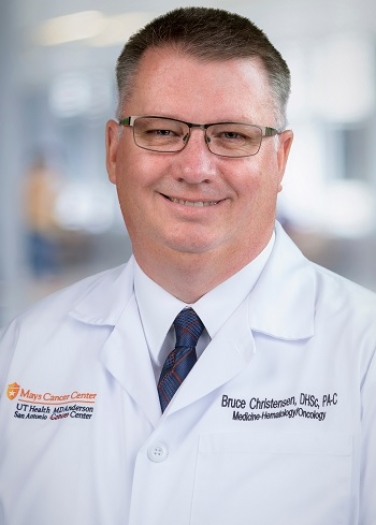 Bruce Christensen received his initial medical training in the United States Air Force more than 20 years ago. He has practiced in many different areas including internal medicine, hematology/oncology, bone marrow transplants and aerospace physiology. Upon retiring from the military in 2007, he became an assistant professor and clinical coordinator for the Texas Tech Health Science Center, Physician Assistant Program. Christensen also serves on the Board of Directors of the Texas Academy of Physician Assistants and is a Distinguished Fellow of the American Academy of Physician Assistants. He joined UT Health San Antonio MD Anderson Cancer Center in April 2013, specializing in inpatient hematology.